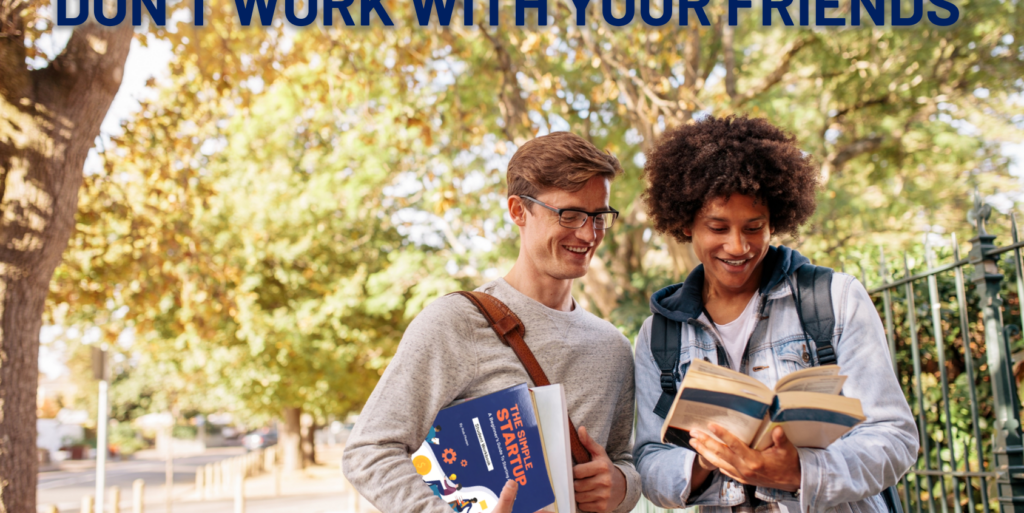 Why You Shouldn’t Work With Your Friends

When you first bring up this project to your class there is curiosity, excitement, dollar signs in their eyes!… and a little apprehension from some students. This is probably due to you taking a break from most of the experiences they’ve had in their school careers to date.

Here’s an opportunity to go pursue an interest, passion, or idea, with very little constraints on what you do or how you do it! Who wouldn’t get excited by all that freedom and potential?

However, the moment you mention that the Simple StartUp project can be done in teams… you immediately lose the attention of the class! Everyone spins around to lock eyes with their best friends and mouth “we’re on a team”. Though some also drop their eyes and hope that no one asks them to be on a team since they finally have a chance to work on their own without a teammate forced on them.

Those are pretty much the two major reactions I see when I mention the possibility of teams. They won’t even have an idea yet or direction they want to go, but they know who they want to face that indecision with!

By no means is it a bad thing to want to work with your friends. However, it often doesn’t go well once the team gets down to business. It’s kind of like picking roommates. Think of your first college dorm or an apartment. Did you live with your friends? Often you invite your friends to live with you, and then shockingly they are all so comfortable together that no one cleans! Even worse, someone is late with their share of the rent! Now it gets awkward fast because that friend relationship needs to become more businesslike to ensure the survival of the ecosystem.

Of course students want to work with their friends. They like them, they enjoy spending time with them, and here’s an opportunity to hang out together during class, which doesn’t usually get to happen! Try being the kid in high school who turns down their friends when they ask to work with them. It’s a hard situation for sure.

As the guide in the Simple StartUp project, you need to also act as their advisor.Layout the reasons as to why they should be patient and reconsider how they pick their teams. I will tell my students they need to brainstorm strengths, talents, and business ideas on their own. They need at least 10 of each before they are allowed to consider working with others.

The reason? If a team forms too soon and the leader of the friend group has an idea, will the others challenge them on it? Will everyone have the same skills and experiences because they’ve been together for years as friends?

This will leave holes in the business where no one has the skills to fill needed roles. When conflict arises due to differences of opinion, uneven work ethics, or distribution of workload, will they be able to deal with the conflict effectively or will it sour relationships. Once real money comes into play, the game gets real. Relationships can take a real hit if there is a sense of unfairness going around.

So what do you do? I love to use this as an opportunity to create resumes. Have each student draft a profile of themselves in a resume format. Leave their names out of it and instead start listing things like:

Give each profile a code number to match to a student so you can see who owns which profile. Then, post the profiles in your class LMS. Challenge students to assemble their team of ideal candidates to work with based on the profile code numbers.

So pick teams based on nothing but the skills, personality, and resources of an individual. Then reveal the coding system. I imagine most will be shocked by the people they picked for their teams. Take this key moment to point out that a friend doesn’t necessarily make a good business partner. They could be a great asset to your team, but you should go deeper than just saying I want to work with the people I already know.

Of course there will be people who were selected by multiple teams. Now the true fun begins. With business ideas in hand, allow students to mingle and attempt to convince people to join their team. An extra class spent discussing effective team building and forming alliances will be well worth the time by the end. You will have Simple StartUps that are able to work effectively together due to a sound decision to form partnerships based on more than friendship.

If you do something different with your classes, we want to hear about it! Share your story at www.thesimplestartup.com/stories or post on our Facebook group www.facebook.com/groups/thesimplestartup.

Get teacher tips, business ideas, new tools to try, ways to implement The Simple StartUp in your classroom or home, and important information about entrepreneurship.

This content is not provided or commissioned by the any vendor or institution. Opinions expressed here are author’s alone, not those of the any product or service being reviewed, and have not been reviewed, approved or otherwise endorsed by a vendor. Full Disclosure: We may earn a commission if you click on our links and make a purchase, at no additional cost to you. TheSimpleStartUp.com is a participant in the Amazon Services LLC Associates Program, an affiliate advertising program designed to provide a means for sites to earn advertising fees by advertising and linking to Amazon.com.